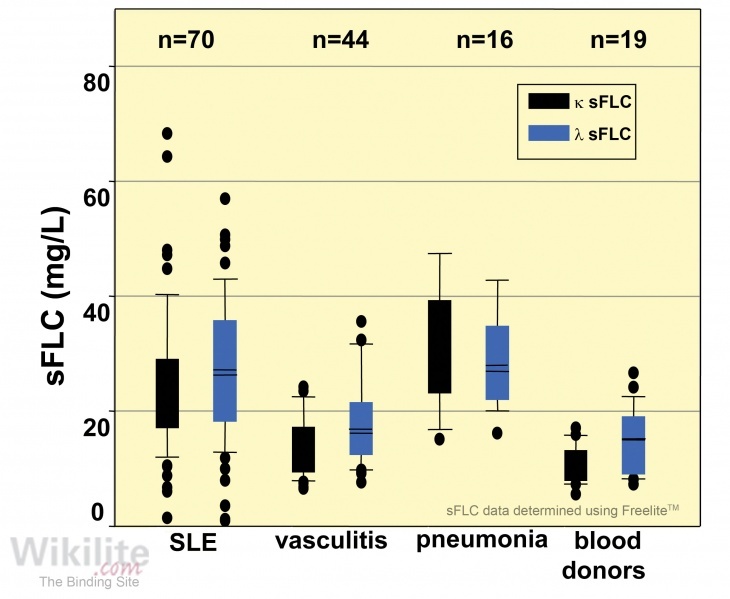 An early report by Sölling [806] documented modest increases in sFLCs in a small number of patients with tuberculosis and chronic bronchitis. Elevations in sFLCs were also found in patients with active sarcoidosis, at approximately twice the concentration found in normal individuals. A later study by Hoffman et al. [761] demonstrated elevated levels of polyclonal sFLCs in patients with acute pneumonia (Figure 35.13). Western blots and ELISAs were used to investigate FLCs in murine lung emphysema models, and amounts were found to be increased in serum and lymph node extracts after smoke exposure; sFLCs were also found to be elevated in patients with chronic obstructive pulmonary disease (COPD; n=6) [807]. Further experiments indicated the binding of FLCs to neutrophils and a potential role in the pathology of COPD [807].

Hampson et al. [908] assessed ∑FLC concentrations at baseline as a potential clinical biomarker in alpha 1-antitrypsin deficient (A1ATD) (n=547) and non-A1ATD COPD patients (usual COPD, n=327). On multivariate analysis, elevated ∑FLC concentrations (>44.3 mg/L) were associated with increased mortality in both cohorts (A1ATD, odds ratio (OR): 2.89, p=0.002; usual COPD, OR: 1.80, p=0.009), consistent with other published studies (Sections 35.2, 35.3 and 35.10). ∑FLC were also higher in A1ATD patients with chronic bronchitis (p=0.019) and airway bacterial colonisation (p=0.008) and the authors concluded that ∑FLC may be a promising biomarker for risk stratification in COPD. 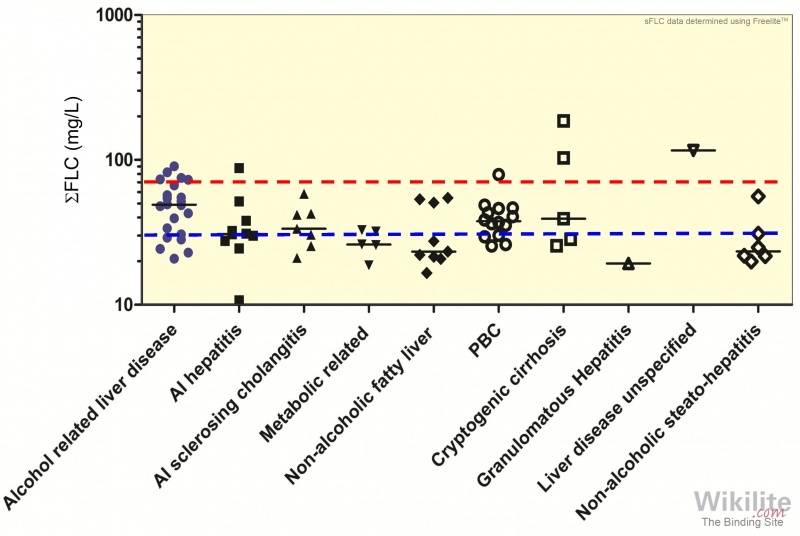 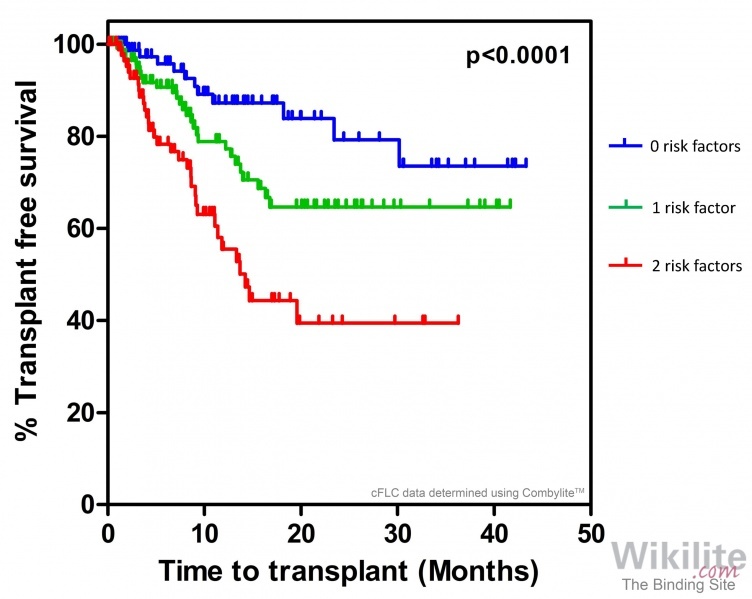 Chronic viral infection is a significant cause of elevated polyclonal immunoglobulins and sFLCs. Chronic hepatitis C virus (HCV) infection is also associated with the development of B-cell disorders including mixed cryoglobulinaemia (MC) and B-cell NHL [810]. Patients with HCV-related MC are at a 35-fold increased risk of lymphoproliferative disease compared with the general population [811].

Terrier et al. [812] studied 59 patients with HCV infections and MC. The results showed elevated sFLCs in nearly 50% of patients. Furthermore, mean polyclonal sFLC concentrations progressively increased with worsening disease category (p<0.001) and increasing cryoglobulin concentrations (p<0.0001). Ten patients had an abnormal κ/λ ratio at baseline, and changes in the ratio correlated with the virological response to HCV treatment. The authors speculated that following antiviral therapy, the κ/λ sFLC ratio was a surrogate marker of the control of HCV-related lymphoproliferation. Basile et al. [1047] reported that an abnormal κ/λ sFLC ratio at baseline was associated with no/partial response to Rituximab therapy in HCV-infected MC patients (p=0.03), and speculated that pre-treatment assessment of the sFLC ratio may be useful to predict response.

A subsequent study by Terrier et al. [814] included 155 HCV-infected patients and compared sFLC and IgM Hevylite® (HLC) measurements in the following four groups: 1) no MC; 2) asymptomatic MC; 3) MC vasculitis; and 4) MC vasculitis with B-cell NHL. On univariate analysis, the κ/λ sFLC ratio and IgMκ/IgMλ HLC ratio were significantly different between the groups (both p<0.0001). However, in multiparametric analysis (including a total of 7 serum biomarkers), neither the sFLC ratio nor IgM HLC ratio remained significantly different between patients with and without overt B-cell NHL. No data on the FLC or HLC concentrations was provided.

Teng et al. [818] determined that adding sFLC or albumin measurements to that of alpha-fetoprotein would improve the diagnosis of hepatocellular carcinoma. While albumin measurement would appear to be the simplest choice for diagnostic purposes, the authors considered that sFLC elevation probably reflected the developing B-cell response to viral infection and that further study was merited to investigate the role and potential utility of sFLC measurement.

Three preliminary reports have been published concerning FLCs in renal transplant recipients. Li et al. [819] found that, out of a number of urinary proteins measured, FLCs provided the best prediction of early allograft rejection (n=103). Shabir et al. [820] measured serum ΣFLCs in two transplant cohorts (n=399 and n=40) and found variations according to the type and level of immunosuppression. It was speculated that sFLC measurement might provide information useful for managing immunosuppressive regimes. Shabir et al. [821] quantified ΣFLCs in serial serum samples collected from 79 renal transplant recipients and corrected values for renal function to give a better estimate of FLC production (eFLC). eFLC was lower when more aggressive immunosuppression was being administered and low levels were predictive of increased risk of infection.

Post-transplant lymphoproliferative disorder (PTLD) can be a serious complication of solid organ transplantation and haematopoietic stem cell transplantation. It comprises a spectrum of B-cell hyperproliferative states ranging from benign lymphoid hyperplasia to malignant neoplasms (mostly NHL) [822]. Epstein-Barr virus (EBV) is present in the majority of PTLD tumours and plays a crucial role in the pathogenesis of these tumours. Whilst most PTLD patients have detectable EBV DNA in peripheral blood, this is a non-specific finding [823]. Therefore, there is a need for additional markers to identify transplant patients at risk of PTLD.

Engels et al. [822] studied the value of sFLCs to predict risk of PTLD in solid organ transplant patients. Pre-diagnostic serum samples were available (on average 3.5 months prior to diagnosis) from 29 transplant recipients with PTLD and 57 matched controls. A polyclonal sFLC elevation was found in a higher proportion of cases compared with controls (59% vs 37%), and was significantly associated with increased risk of early-onset and polymorphic PTLD. A stronger relationship between sFLCs and PTLD was observed among non-kidney transplant recipients. A subsequent study of PTLD in renal transplant patients found no association of elevated sFLC concentrations with PTLD risk [824]. This suggests that non-specific increases in sFLCs due to renal insufficiency (Section 6.3) reduce the utility of such rises for predicting PTLD.

In a second study by Engels and colleagues [825], plasma FLC concentrations from 36 paediatric transplant recipients were measured (18 allogeneic, haematopoietic stem cell transplants and 18 liver transplants). Polyclonal FLC elevations were seen in 26% of the patients and monoclonal elevations in 6%; all of the latter had PTLD. It was also noted that there was a tendency for FLC concentrations to change in parallel with measurements of EBV load. Monoclonal immunoglobulins were present in over 90% of the plasma samples but these did not always match the light chain clonality indicated by FLC ratios. The authors suggested this was because PTLD is an oligoclonal disorder rather than a truly monoclonal one. In a more recent, third report from Engels et al. [826], 43 allogeneic haematopoietic stem cell transplant recipients were enrolled and 11 with PTLD were compared with 32 without PTLD. Of the 11 patients with PTLD, only three had elevated FLC concentrations and none had abnormal ratios and there were more frequent FLC abnormalities amongst the controls, indicating that FLC concentrations were not associated with the risk of developing PTLD. In both cases and controls, elevations of κ FLC were more frequent than λ. However, the authors considered that the timing of their serum collection, soon after transplant, may have compromised the identification of PTLD (which tends to arise later) and concluded that further investigations were warrented to understand the biological implications of FLC abnormalities in transplant recipients.

IgG4-related disease is a fibro-inflammatory condition often, but not always, associated with elevated serum IgG4 concentrations. Grados et al. [827] reported that sFLC concentrations were significantly higher in IgG4-related disease than normal, and 43% of patients had abnormally high κ/λ sFLC ratios. This was independent of renal function, and the authors concluded that there was a disproportionate increase in κ FLC production. Patient numbers were too small (n=16) to assess any relationship with disease activity or prognosis.