12 - An overview of multiple myeloma and related disorders 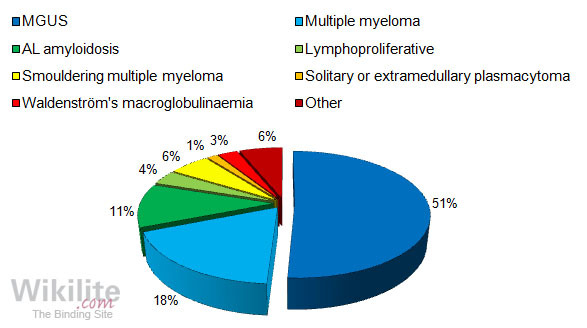 The main clinical applications of serum free light chain (sFLC) and Hevylite® (HLC) measurements are for patients with monoclonal gammopathies. Figure 12.1 shows the associated diseases seen at the Mayo Clinic in 2005 [242]. Since these data are from a specialist referral centre, general hospitals will probably see different patterns of disease referral with a higher percentage of multiple myeloma (MM) and monoclonal gammopathy of undetermined significance (MGUS) and fewer AL amyloidosis patients.
This section presents an overview of the use of sFLC and HLC measurements in MM and related disorders; from pre-malignant MGUS and smouldering multiple myeloma (SMM), to the symptomatic disorders MM, plasmacytoma and plasma cell leukaemia.

Figure 12.4. Osteolytic lesions in the skulls of 2 patients with MM.

MM is the second most common form of haematological malignancy after non-Hodgkin lymphoma, and accounts for around 1% of all cancers. In Caucasian populations the annual incidence is approximately 60 per million, and this increases with age [243][244]. The number of new cases diagnosed each year is around 4,800 in the UK and almost 40,000 across Europe [243]. Worldwide, this figure rises to around 114,000, and a large variation in the incidence rates between different populations is observed (Figure 12.2) [243]. Furthermore, the incidence is slowly rising. In Europe, the incidence of MM has risen by approximately 10% in the last decade [244]. Similarly, a 13% increase in MM incidence has been observed in Taiwan between 2007 and 2012 [1095]. Survival rates for patients with MM are continually improving as a result of new treatments [245]. For example, 5-year survival in England has increased from around 10% in the early 1970s to almost 50% in 2010 - 2011 (Figure 12.3) [1054]. However MM deaths are higher in older adults, with a 5-year survival of approximately 30% for patients aged ≥75 years [1055].

Figure 12.4. Osteolytic lesions in the skulls...

According to international guidelines, serum electrophoresis and sFLC analysis constitute an effective screen for monoclonal plasmaproliferative disorders (other than AL amyloidosis, Chapters 23 and 25). Until recently, the diagnosis of MM was solely based on the presence of excess monoclonal plasma cells in the bone marrow alongside related organ or tissue impairment (i.e. hypercalcaemia, renal insufficiency, anaemia or bone lesions ], collectively known as the CRAB criteria). However, guidelines now define additional "biomarkers of malignancy (also known as SLiM criteria)", which include highly abnormal sFLCs (defined as an involved/uninvolved Freelite® sFLC ratio ≥100), to form part of the diagnostic criteria for MM (Section 25.2) [42].

Torti et al. [879] performed a retrospective analysis of 180 newly diagnosed MM patients and compared the use of traditional CRAB markers with the updated IMWG criteria at diagnosis. The majority of cases had a previous history of MGUS and SMM. A total of 21% of patients had at least one detectable SLiM biomarker before the clear manifestation of CRAB criteria; a highly abnormal sFLC ratio was the most common finding, being present in two-thirds of cases. Patients with SLiM features were at a very high risk of progression, with 92% developing CRAB features and progressing to active MM in less than one year. This study confirms the ability of the new MM diagnostic criteria to identify patients who are likely to benefit from early treatment before the development of end-organ damage.

MM patients can be subdivided into secretory and non-secretory types based on the presence or absence of a detectable monoclonal protein, with nonsecretory patients representing only 2% of cases [42]. The majority (85%) of patients with MM secrete an intact immunoglobulin monoclonal protein. The relative frequency of the classes of immunoglobulin secreted by the plasma cell clones reflect the frequencies normally observed in the body. Light chain MM (LCMM) and nonsecretory MM (NSMM) represent a further 13% and 2% of MM patients, respectively. A summary of MM monoclonal protein types is shown in Figure 12.5; this data is from more than 2500 patients entered into the UK Medical Research Council MM trials [247].

Over the past 15 years, there have been publications covering many aspects of sFLC analysis in the diagnosis, monitoring and prognosis of MM; these are reviewed in individual Chapters covering LCMM (Chapter 15), NSMM (Chapter 16) and intact immunoglobulin MM (IIMM; Chapters 17 and 18). Additionally, clinical applications of sFLC testing have been described in other malignant conditions that are related to MM, including plasmacytoma (Chapter 21) and plasma cell leukaemia (Chapter 22). The inclusion of sFLCs for routine monoclonal gammopathy screening and the relative merits of serum versus urine FLC measurements are also discussed (Chapter 23 and Chapter 24). It is well established that sFLC measurements provide valuable information in patients with diseases with monoclonal light chain deposition, such as cast nephropathy, AL amyloidosis and light chain deposition disease. These clinical applications are addressed in the succeeding section (Section 5).

Following the introduction of Hevylite assays, there is accumulating evidence showing that HLC analysis provides an additional tool for the management of patients with MM, by giving a quantitative and non-subjective indication of clonality. This evidence is presented in Chapters 17 and 18.

MGUS is a pre-malignant, asymptomatic plasma cell proliferative disorder that is estimated to affect 3% of the general population aged 50 years or older [10]. Patients with MGUS progress to myeloma or a related malignancy at a rate of around 1% per year [249]. Three distinct types of MGUS can be defined based on the monoclonal protein type: IgM MGUS, non-IgM (IgG or IgA) MGUS, and FLC MGUS (Table 12.1) [42]. In general, IgM MGUS is associated with evolution to lymphoplasmacytic tumours such as Waldenström’s macroglobulinaemia (WM), wherease non-IgM MGUS is associated with evolution to MM [250].

SMM is an intermediate clinical stage between MGUS and MM which carries a higher risk of progression to malignant disease (around 10% per year for the first 5 years) [255]. Recent studies indicate that in the spectrum of disease development from MGUS, through SMM to symptomatic MM, monoclonal FLC production becomes progressively more probable. Approximately one-third of MGUS patients have an abnormal κ/λ sFLC ratio at diagnosis; this increases to around 80% in patients with SMM and 95% in MM.
In both MGUS (Chapter 13) and SMM (Chapter 14) an abnormal κ/λ sFLC ratio indicates a higher risk of progression to malignancy than a normal ratio [256][31][32][259]. In these patients, sFLC analysis plays an important role in risk stratification and disease management, such that international guidelines recommend that patients with either MGUS or SMM should be risk-stratified at diagnosis to optimise counselling and follow-up (Chapter 25) [260]. Whilst the benefits of sFLC analysis in MGUS and SMM risk-stratification are well established, HLC analysis is emerging as a new prognostic tool in these pre-malignant conditions.

12.4. Improving our understanding of disease pathogenesis and response to therapy

Data from measurement of sFLCs and HLCs has made a contribution to our understanding of monoclonal gammopathies. This includes aspects of: 1) clonal heterogeneity; 2) disease evolution, and 3) the bone marrow microenvironment.

Progression from MGUS to MM can involve a complicated branching transformation from benign to malignant clones, resulting in the presence of multiple clones at diagnosis (Chapter 19). Genetic transformations change the clonal composition during the course of disease and these changes may be reflected by changes in monoclonal protein production. Monitoring patients with a combination of HLC and FLC measurements provides information on tumour clones that may evolve over time. One such example is free light chain escape (FLC escape), first characterised in 1969, in which a patient with intact immunoglobulin MM relapsed with an increase in FLCs, but with no associated increase in intact immunoglobulins (Section 18.2.1) [261]. The importance of monitoring intact immunoglobulins and FLCs to survey these changes is discussed in Chapters 18 and 19.

More recently, quantitation of uninvolved polyclonal immunoglobulins of the same isotype as the monoclonal immunoglobulin (HLC pair) has offered insights into multiple myeloma tumour biology and the bone marrow microenvironment. Michallet et al. [942] report that patients treated with novel agents and autologous stem cell transplantation have increased recovery of the uninvolved HLC pair (e.g. recovery of IgGκ in an IgGλ patient), than patients treated with novel agents alone (p<0.001). Kumar et al. [905] suggest that normalisation of HLC ratios in patients who are MRD negative by standard criteria may indicate immune system recovery and a preliminary study by Campbell et al. [932] concluded that normalisation of both FLC and HLC assays provides a surrogate maker for MRD negativity by flow cytometry [932]. These studies are further discussed in Section 18.4.3. Several groups have also demonstrated the prognostic value of HLC pair suppression in MGUS (Section 13.2.2) and MM (Sections 20.4 and 20.5).

Figure 12.4. Osteolytic lesions in the skulls of 2 patients with MM.

Figure 12.5. Classification of MM based upon monoc...