13.3. MGUS as the precursor condition for MM and related disorders

Identification of factors that predict progression in MGUS, such as those described above, is important for individual patient management because the risk of transformation is life-long and the evolution of disease between individuals is variable. MGUS may evolve to other asymptomatic pre-malignant states with a significantly higher risk of progression (i.e. smouldering MM, smouldering WM, smouldering LCMM: Section 12.3). Disease evolution has been shown to be characterised by the acquisition of genetic mutations by tumour cell clones and associated changes in the bone marrow microenvironment (Chapter 19) [254][279]. 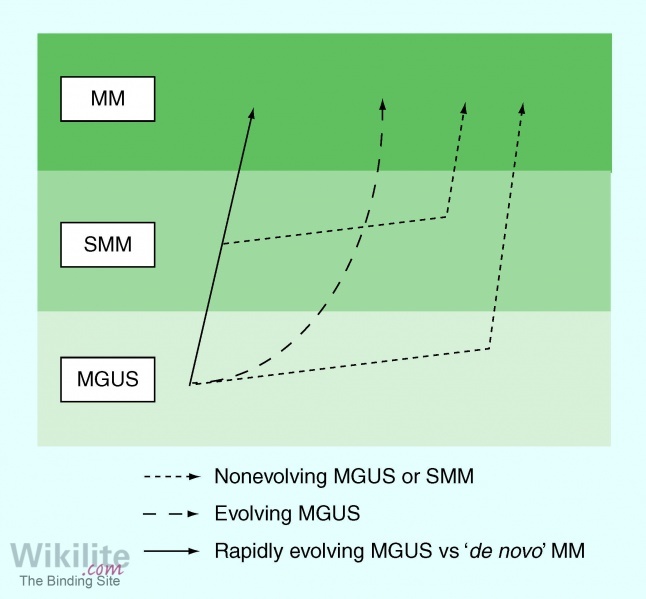 Two independent studies, by Landgren et al. [281] and Weiss et al. [251], addressed whether MGUS is consistently present prior to a diagnosis of MM. Landgren et al. [281] tested pre-diagnostic serum samples from 71 subjects who developed MM. Samples were available up to 10 years prior to the diagnosis of malignant disease. Using serum protein electrophoresis (SPE), serum immunofixation (sIFE) and sFLC analysis, it was shown that >80% of patients had detectable monoclonal protein ≥8 years before diagnosis, increasing to 100% 2 years before diagnosis. In approximately half of the patients who went on to develop MM, the involved/uninvolved sFLC ratio (defined as κ/λ in κ patients and λ/κ in λ patients) showed a year-by-year increase, whilst ratios in the other half remained largely stable. This is an important observation since an evolving MGUS phenotype (in which the monoclonal protein shows a steady increase, Figure 13.10) has been shown to identify patients with a high risk of malignant transformation [270][272][1029]. For example, Rosinol et al. [270] reported transformation rates of 55% and 10% at 10 years of follow-up for evolving and stable phenotypes respectively.

In a separate group of patients, Weiss et al. [251] demonstrated that 27 of 30 MM diagnoses were preceded by MGUS. Monoclonal proteins were identified by SPE and/or IFE in 78% of patients and by an abnormal κ/λ sFLC ratio alone in 22% of patients. Of the 3 patients who had no MGUS detected, one patient with IgG myeloma had only one pre-diagnostic serum sample available at 9.5 years before diagnosis. The remaining 2 negative cases were IgD myeloma with sera available only 3 and 5 years before the diagnosis. Similarly to Landgren et al., the authors found that substantial increases in the involved sFLC ratio may precede the diagnosis of MM, with or without a corresponding change in the monoclonal intact immunoglobulin. It was notable that, in all four patients diagnosed with LCMM or NSMM, the disease evolved from light chain MGUS.

Taken together, these findings confirm that a pre-malignant MGUS phase exists prior to disease emergence in most MM and AL amyloidosis patients. IgA and IgG MGUS typically progress to MM or AL amyloidosis, while IgM MGUS is more likely to progress to WM, non-Hodgkin lymphoma or AL amyloidosis, and less commonly, IgM MM [1016][1030]. In one study by Hajek et al. [1029], just 1 out of 260 (0.4%) IgM MGUS patients progressed to IgM MM.

In a review of MGUS as a precursor condition, Weiss and Kuehl [280] included a model illustrating different patterns of MGUS progression comprising: non-evolving, evolving and rapidly evolving (Figure 13.10). Measuring sFLC levels in routine MGUS follow-up may help to identify patients, with an evolving phenotype, who are at a higher risk of progression to malignant disease compared to patients with stable MGUS.

At present, the IMWG [27] recommends the use of monoclonal protein type, and baseline monoclonal protein concentration and κ/λ sFLC ratio to risk stratify MGUS patients (Section 25.3.2). However, the risk of progression to MM may not remain the same throughout the course of MGUS.

Langren et al. [1219] investigated changes in immunological biomarkers in MGUS patients who progressed to MM and those who did not, using samples from the National Cancer Institute Prostate, Lung, Colorectal, and Ovarian Cancer Screening Trial. The authors identified 685 MGUS patients, of which 187 patients progressed to MM, and 498 who showed no evidence of progression in the follow up period (up to 16 years). The study identified the following as risk factors for progression to MM: IgA isotype, a monoclonal protein concentration ≥15 g/L, a sFLC κ/λ ratio <0.1 or >10 and the presence of immunoparesis (uninvolved immunoglobulins below the lower level of normal). Freelite was used to measure FLCs.

For non-IgM intact immunoglobulin MGUS patients, changes over time were examined in 159 patients who progressed, and 156 matched non-progressing MGUS controls. Increases in monoclonal protein concentration (p=0.02), involved sFLC levels (p=0.01) and number of suppressed uninvolved immunoglobulins (p<0.001) were associated with a higher risk of progression to multiple myeloma. These patterns were investigated further in samples from patients with at least 1 pre-diagnostic sample within 2 years of diagnosis or being selected as a control and at least 3 serial samples. The controls were also required to have at least 8 years of follow-up without progression. Forty-three progressing patients and 108 controls were included in these analyses. Progressors were more likely than non-progressors to have a sample scored as high-risk during their disease course (53% vs 1%, p<0.001). It is also important to note that 70% of the progressors had a sample scored at low or intermediate risk before progression, which indicates that risk may not remain stable over time, that it may increase and that annual blood testing for all MGUS patients may be helpful [1219].

Similar analyses were performed on light chain MGUS patients (28 progressors, 56 non-progressors) and again, increases in involved sFLC concentration (p<0.001) and number of suppressed immunoglobulins (p<0.001) were associated with a higher risk of progression. Progressors were more likely than non-progressors to have a sample scored as high-risk during their disease course (70% vs 1%, p<0.001). In the light chain MGUS cohort, 71% of the progressors had a sample scored at low or intermediate risk before progression, again indicating that risk of progression may alter over time and that monitoring MGUS patients annually may provide value [1219].

Landgren et al. [1219] have shown that the risk of progression of MGUS to MM is not constant, and may change during disease course, therefore these patients should be followed-up. This data “… supports annual blood testing for all individuals diagnosed with MGUS or light-chain MGUS, as well as yearly assessment of a patient’s clinical risk status.” Monitoring of MGUS patients may enable early detection of progression to MM and early treatment of those patients who do progress (Section 13.3.3).

13.3.4. MGUS is associated with increased mortality

Kristinsson et al. [1017] compared the survival of MGUS patients (n=4,259) with matched controls from the general population in Sweden (n=16,151). After 15 years follow-up, the cumulative relative survival ratio of MGUS patients compared to controls was 0.7, and confirmed that MGUS patients have increased mortality. When the causes of death were examined, MGUS patients had an increased risk of dying from a number of haematological conditions, including MM, IgM lymphoma and AL amyloidosis. But there was also an increased risk of MGUS patients dying from non-lymphoproliferative diseases such as bacterial infections and heart, liver and kidney diseases. Similar findings were reported by Kyle et al.[1016], who suggest that the increased risk of death from non-haematological causes may be due to the fact that MGUS is often diagnosed as an incidental finding following investigation of other potentially serious conditions that may be associated with increased mortality. Kristinsson et al. [1017] conclude that a diagnosis of MGUS is of significance, not only with regard to the increased risk of malignant transformation but also with regard to an excess mortality from other causes.

Despite MGUS being a common condition that is associated with increased mortality, there is currently no evidence to recommend screening for this condition. However, a trial is currently in progress in Iceland (iStopMM: www.blodskimun.is) that hopes to screen approximately 120,000 adults over the age of 40 for MGUS. Once participants are identified as having either MGUS or SMM, they will be invited to join a randomised clinical trial that aims to define optimum MGUS monitoring protocols and the benefits of screening and early intervention. 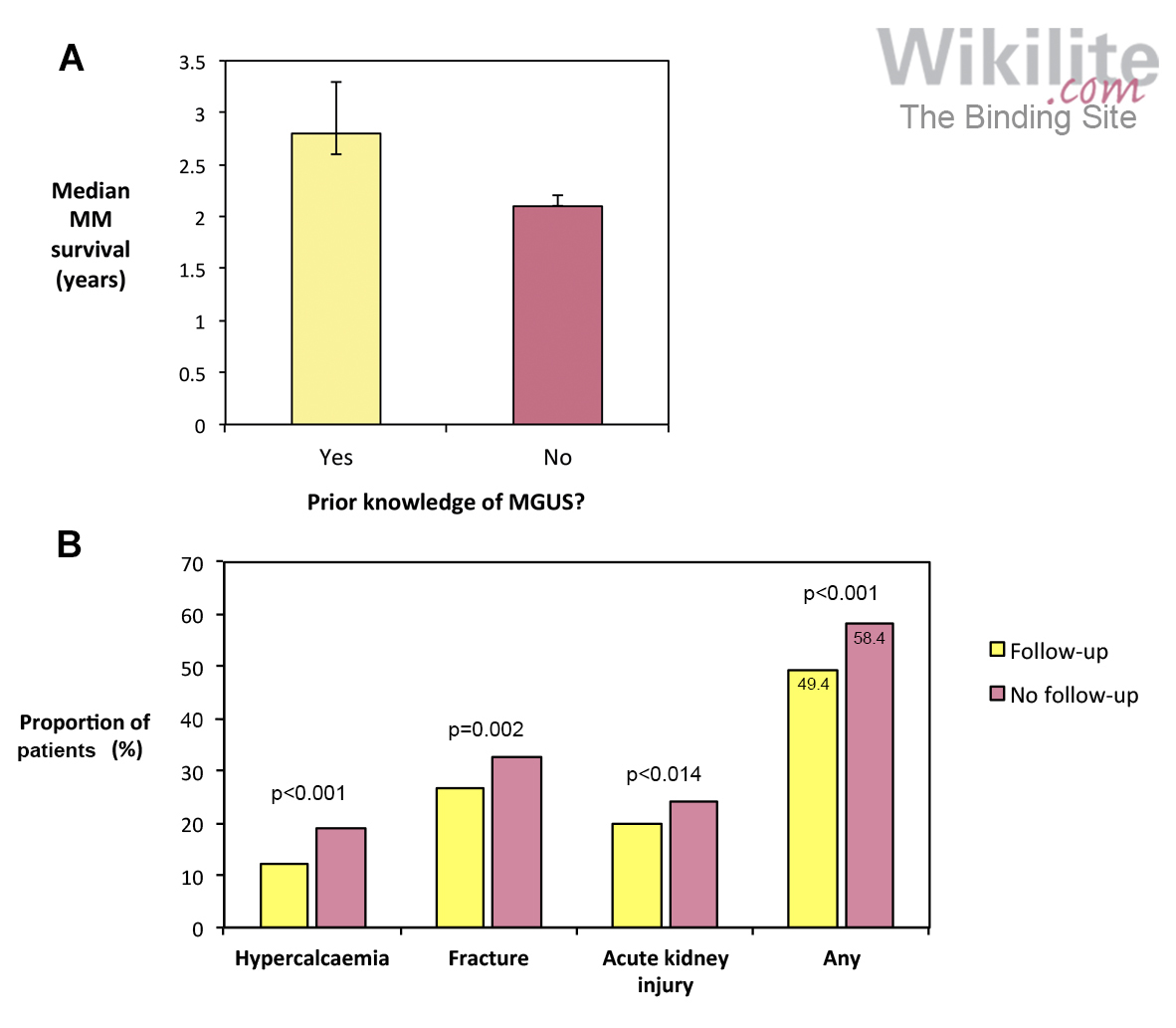 Go and colleagues [874] compared the rates of major complications at cancer diagnosis for patients with a monoclonal gammopathy-associated malignancy (MM, Waldenström’s macroglobulinaemia and lymphoplasmacytic lymphoma) for patients with and without MGUS follow-up. Of the 17,457 study patients, 6% had a prior diagnosis of MGUS. Patients with prior MGUS follow-up experienced significantly fewer complications, including acute kidney injury, hypercalcaemia and fractures (Figure 13.11B).

Although both studies provide support for the practice of MGUS follow-up examinations, a recent commentary by Kyle and Rajkumar [875] stated that prospective studies are now required to confirm the value of MGUS follow-up and the optimal approach to monitor patients.