Monoclonal gammopathy of undetermined significance (MGUS) is characterised by the presence of a monoclonal protein in the serum of asymptomatic individuals who do not meet the diagnostic criteria for multiple myeloma (MM), AL amyloidosis, Waldenström's macroglobulinaemia (WM), lymphoproliferative disorders, plasmacytoma or related conditions. Whilst most MGUS patients have a stable condition and remain asymptomatic, a small proportion will progress to MM or a related B-cell or lymphoid cancer. This equates to an annual risk of malignant transformation of approximately 1%-per-year lifelong risk of malignant transformation [249][1016][1029].

MGUS is defined as follows (all criteria must be met): 1) a serum monoclonal protein <30 g/L; 2) clonal bone marrow plasma cells <10%; and 3) the absence of end-organ damage such as hypercalcaemia, renal insufficiency, anaemia, and bone lesions that can be attributed to the plasma cell proliferative disorder. The definition of MGUS should not be confused with the term “monoclonal gammopathy of renal significance” (MGRS), which is used to describe a group of haematological disorders associated with kidney disease that fail to meet the standard definitions for MM or lymphoma (Chapter 26.4.1) [262].

MGUS is present in approximately 3% of individuals aged 50 or older, and in around 5% of those aged 70 or older [10]. It is very rare in people aged below 30; in a study of 6842 individuals in this age category, only 5 cases of MGUS were identified [1027]. MGUS has a 2-fold higher incidence, a 3-fold higher prevalence and an earlier age of onset in African-Americans [1027][263][1028] compared to white Americans, but a similar prevalence in Mexicans [1122], and a much lower prevalence (0.66%) in mainland China [972], and is more common in individuals with autoimmune, infectious and inflammatory disorders [264]. Due to the high frequency of MGUS, it typically accounts for between 50 and 65% of all monoclonal proteins detected, although around 80% of individuals will be unaware that they have the condition [265].

Historically, the term MGUS was used only to describe patients with a monoclonal intact immunoglobulin. In a Mayo Clinic study, 70% of monoclonal proteins identified were IgG, 15% IgM, 12% IgA and 3% biclonal [249]. In addition, the term “idiopathic Bence Jones proteinuria” was used to describe the presence of a monoclonal light chain in the urine (>200 mg/24-hour), in the absence of both an intact immunoglobulin monoclonal protein in the serum and end-organ damage attributable to a plasma cell proliferative disorder. Such patients are at high risk for the development of MM or AL amyloidosis, with a cumulative probability of progression of 20% at 5 years [266]. In 2010 a new category termed light chain MGUS was recognised, and this represents the pre-malignant precursor of light chain MM (LCMM) (Section 13.1.1.) [267]. International Myeloma Working Group (IMWG) guidelines summarise definitions for the three current categories, namely non-IgM (IgG or IgA), IgM and light chain MGUS (Section 25.2.3).

Figure 13.1. Serum and urine IFE on a patient with isolated urine FLC excretion. 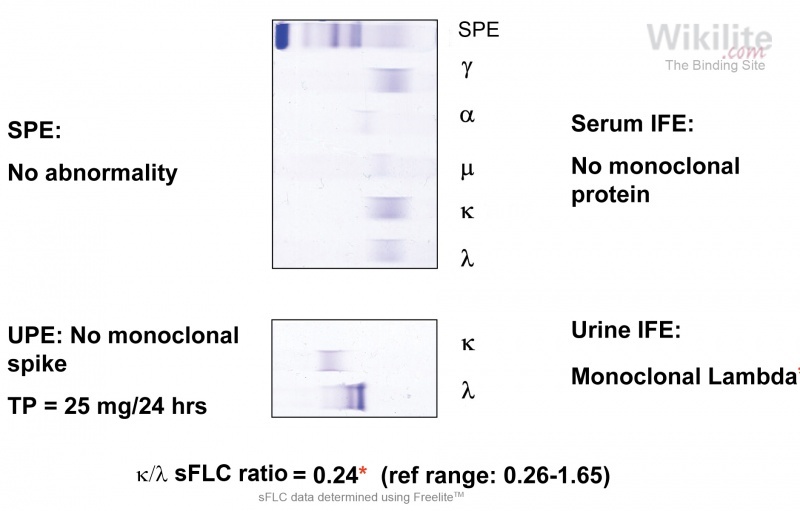 Light chain MGUS was proposed by Dispenzieri et al. [267] as a separate clinical entity and the pre-malignant precursor of LCMM. The authors defined light chain MGUS as an abnormal κ/λ sFLC ratio with an increased concentration of the involved sFLC, no expression of monoclonal intact immunoglobulin, and an absence of end-organ damage that can be attributed to the plasma cell proliferative disorder. An example is shown in Figure 13.1. No abnormality was detected by SPE or urine protein electrophoresis (UPE), but an abnormal κ/λ sFLC ratio indicated the presence of monoclonal FLCs. This finding was confirmed by the detection of λ uBJP by urine IFE (uIFE).
In the study by Dispenzieri et al. [267] the prevalence and risk of progression of light chain MGUS amongst 18,357 residents of Olmstead County, Minnesota aged 50 years or older was assessed. 610 (3.3%) individuals had an abnormal κ/λ sFLC ratio, of whom 213 had an intact immunoglobulin MGUS. This included 57/213 additional patients whose monoclonal intact immunoglobulin had not previously been detected by screening with SPE, and so the prevalence of conventional MGUS in this population was revised from 3.2% to 3.4% (95% CI 3.2 - 3.7). Of the 397 individuals with an abnormal sFLC ratio but no abnormality detected by SPE, a total of 146 met the definition of light chain MGUS, equivalent to a prevalence of 0.8% (95% CI 0.7 - 0.9). This represented 19% of the total MGUS population; a proportion that matches the relative incidence of LCMM compared to all MM. The light chain type was identified as κ or λ in 108 and 38 individuals, respectively. Overall, involved sFLC concentrations tended to be low; only around 10% of patients had concentrations greater than 200 mg/L. It was noted that 23% of light chain MGUS patients either had or subsequently acquired, renal disease; an observation of relevance to the later proposal for monoclonal gammopathy of renal significance to be considerd as a separate entity (Section 26.4.1). A similar incidence of light chain MGUS (0.7%) was confirmed by the German population-based Heinz Nixdorf Recall study of 4702 individuals aged 45 - 75 years [287].
Pelzer et al. [1059] studied disease progression in 75 light chain MGUS patients enrolled in the Heinz Nixdorf Recall study at 5 and/or 10 year time points. Although no patients progressed to overt lymphoproliferative disease (including LCMM), light chain MGUS patients had a 1.5-fold higher risk of having a coexisting solid tumour (p=0.04). Additionally, 3 individuals with progressively increasing sFLC concentrations developed conventional MGUS. There were no differences in overall survival between patients with and without light chain MGUS, but individuals with monoclonal λ FLCs had shorter overall survival compared to those with monoclonal κ FLCs and normal controls (p=0.01). During follow-up, light chain MGUS was a persistent finding in 45% (14/31) patients, but in the remaining 55% (17/31) of patients the monoclonal protein became undetectable. The authors concluded [1059] that light chain MGUS is a relatively benign disorder with a high rate of monoclonal protein disappearance.

Figure 13.1. Serum and urine IFE on a patient with isolated urine FLC excretion.