Normal reference intervals for κ sFLCs, λ sFLCs and the κ/λ sFLC ratio were published by Katzmann et al. [644]. These ranges have been locally validated and widely adopted by many centres and are further discussed in Chapter 6. For patients with renal impairment, application of a modified renal reference interval may increase the specificity of the κ/λ sFLC ratio for detecting monoclonal FLC production (Section 6.3).

For each sample, both κ and λ sFLCs should always be measured, and the κ/λ sFLC ratio calculated. Some centres (especially those taking part in clinical trials) may also wish to calculate the difference (dFLC) between the involved (iFLC) and uninvolved (uFLC) sFLCs. Definitions of other common terms/abbreviations are summarised in Table 7.3.

International Myeloma Working Group (IMWG) guidelines for sFLC analysis in multiple myeloma (MM) and related disorders recommend that the κ/λ sFLC ratio is calculated as part of the standard investigative workup of patients with suspected multiple myeloma (Chapter 25) [167]. The ratio is now included in IMWG criteria for the diagnosis of multiple myeloma: an involved/uninvolved Freelite sFLC ratio ≥100 is designated a biomarker of malignancy (Section 25.2.1), and it is also important when documenting a stringent complete response (Section 25.3.5).

For serial measurements, either the iFLC or the dFLC is recommended [167]. There are two principal reasons for this: 1) small changes in uFLC concentrations produce large changes in the sFLC ratio, even when the iFLC is unchanged. Therefore, changes in the κ/λ sFLC ratio may not always be a surrogate marker for tumour burden; and 2) using dFLC can remove some of the variation seen in iFLC values due to changes in renal function. 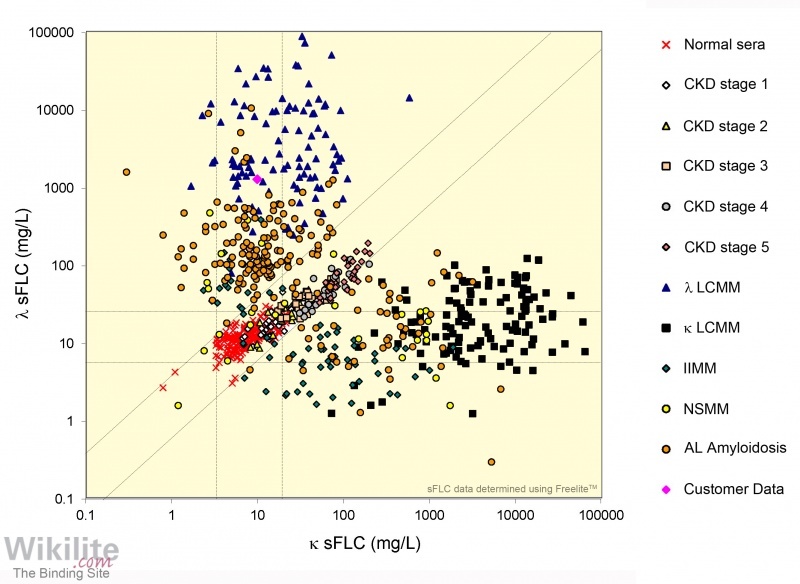 In some cases it may be helpful to plot an individual patient’s result (or an entire cohort of patients’ results) on a FLC dot plot (Figure 7.3). This is a graph displaying κ sFLC concentrations (x-axis) against λ sFLC concentrations (y-axis), both on logarithmic scales. The limits of the normal reference interval for the κ/λ sFLC ratio are represented by two diagonal parallel lines. Each patient result is represented by a single point. If the κ/λ sFLC ratio is normal, the result will fall within the parallel lines. For monoclonal κ or λ sFLCs, the result will lie below or above the lines, respectively.

Abnormally high concentrations of κ and λ sFLCs may result from a number of clinical situations including immune stimulation (Chapter 35), reduced renal clearance (Section 6.3), or monoclonal plasma cell proliferative disorders (Chapter 12) [167]. Patients with either polyclonal hypergammaglobulinemia or renal impairment often have elevated κ and λ sFLCs due to increased synthesis (Chapter 35) or reduced renal clearance (Chapter 26), respectively. For patients with renal impairment, use of a renal reference interval for the κ/λ sFLC ratio may reduce the number of false-positive results (Section 6.3).

A significantly abnormal κ/λ sFLC ratio would only be expected to be due to a plasmaproliferative or lymphoproliferative disorder that secretes monoclonal FLCs and disturbs the normal balance between κ and λ secretion. Use of likelihood ratios when interpreting κ/λ sFLC ratios may improve clinical interpretation of sFLC results for the diagnosis of malignant plasma cell disorders [170].

Biological variation studies define the physiological fluctuation of analyte concentrations in a biological fluid around its homeostatic set point [171]. Knowledge of the biological variation of FLCs in serum is useful when interpreting monitoring data for individual patients. Braga et al. [172] studied the biological variation of sFLC measurements in 21 healthy volunteers (12 women and 9 men), measured at the same time on the same day, every 2 weeks over the course of 2 months. λ sFLC concentrations were significantly higher in men than women (p<0.01), whereas no difference was found for κ sFLC concentrations. Intra-individual variances of κ or λ sFLCs were similar (8.1% and 7.0%, respectively), and were not different between men and women. By contrast, the inter-individual variance of λ sFLCs was higher than that of κ sFLCs (27.5% vs. 14.1%, respectively), and was higher for men than women (33.0% vs. 22.6%, respectively). The reference change value (RCV) defines the minimum significant difference (p<0.05) between two consecutive measurements in the same individual. In this study the RCV for κ and λ sFLCs was similar: 22.6% and 19.6%, respectively. Similar findings were reported by Hansen et al. [173]. Jabor et al. [1195] also reported RCVs of 14.6% and 15.2% for κ and λ, respectively.

Katzmann et al. [174] studied the long-term biological variation of monoclonal FLCs in 158 patients with clinically stable monoclonal gammopathy. For each patient, at least three serial samples were obtained within a 5 year period. During the study, each patient received no treatment, had no change in clinical diagnosis, and had a <5 g/L change in serum monoclonal immunoglobulin quantification by protein electrophoresis. A total of 52/158 patients had measurable monoclonal sFLCs (defined as iFLC ≥100 mg/L with an abnormal κ/λ sFLC ratio). The total coefficient of variation (CV) for iFLC measurements was 28.4%, which was almost entirely attributable to biological variation (CV=27.8%) and, to a lesser extent, due to inter-assay analytical variation (CV=5.8%). The variation in iFLC was more comparable to that of monoclonal protein quantification by urine protein electrophoresis (Total CV=35.8%) than serum protein electrophoresis (Total CV=8.1%). This is likely to reflect the short serum half-life of FLCs compared with intact immunoglobulins (Chapter 3). The RCV for monoclonal sFLCs was 54.5%. This value is significantly higher than that reported by other smaller studies [172][173] and may reflect differences in the length of patient follow-up (5 years vs. less than a week). Several authors now recommend that biological variation data should be taken into account to update the definitions of sFLC response criteria.