Total immunoglobulin concentrations in normal individuals are influenced by a number of factors including age, gender and ethnic background [225][226]. In general, immunoglobulin levels are lower when young and increase into adulthood. The exception is IgG in newborn infants: placental transfer of IgG results in high neonatal serum concentrations (near adult levels) that persist for several months after birth.

Significant ethnic differences in immunoglobulin concentrations have been observed. Black Africans have higher levels of IgG and IgM but similar levels of IgA compared with Caucasian populations [227]. Gender may also influence immunoglobulin concentrations and significant differences in IgM reference intervals for males and females have been reported [228].

In the early 1970s there were a number of initiatives to standardise immunoglobulin measurements at national levels. This was followed, in 1992, by the release of “Certified Reference Material 470” (CRM 470) by the College of American Pathologists and The Bureau Communitaire de Référence. CRM 470 was prepared from serum collected from several hundred healthy donors in five European cities, which was pooled and processed to produce approximately 40,000 vials, each containing 1 mL of lyophilised serum. After value assignments by reference laboratories in Europe and the USA, this material was accepted as the international standard for 15 commonly measured plasma proteins, including IgG, IgA and IgM [229][224].

By 2008, stocks of CRM 470 were becoming exhausted and the Institute for Reference Materials and Measurements in collaboration with The International Federation of Clinical Chemistry, oversaw an initiative to replace CRM 470 with a new, similar protein reference preparation (DA470k) [223]. Most proteins that had been standardised with CRM 470 were transferred to DA470k, including IgG, IgA and IgM.

As DA470k does not have assigned values for the individual light chain types of each immunoglobulin class (that are the targets of the HLC assays), it cannot be used to directly assign values to individual HLC assay calibrators. However, the sum of concentrations measured by pairs of HLC reagents (e.g. IgGκ + IgGλ) should equate to the assigned value for the corresponding total immunoglobulin (i.e. IgG). The calibration of the Hevylite assays is therefore based on this summation, and is further discussed in Section 9.4. It follows that for a particular immunoglobulin class, when the Ig’κ and Ig’λ HLC reference intervals are combined, the range of values should be equivalent to the reference interval for the corresponding total immunoglobulin.

Figure 9.9. Comparison of summated (A) IgG; (B) IgA; and (C) IgM HLC to total immunoglobulin concentrations by Passing-Bablok analysis. 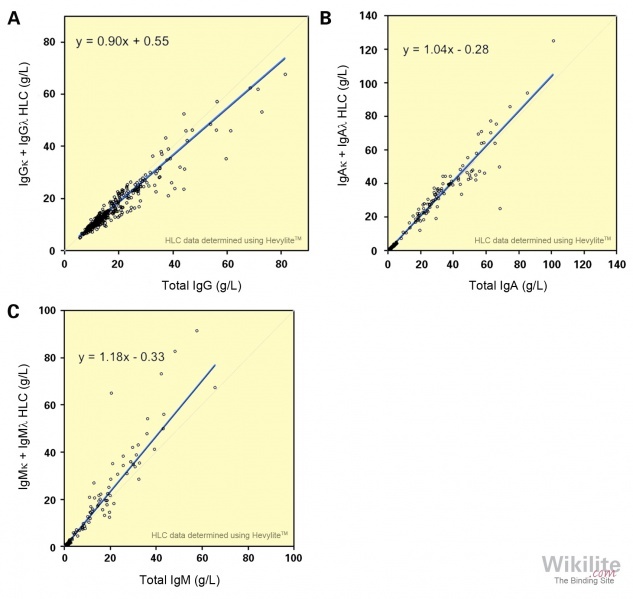 The first reference intervals for Hevylite assays were established in the Binding Site laboratories with prototype Hevylite reagents on the Siemens BN™II instrument, using different collections of normal serum samples. The results were published in a number of abstracts (Tables 10.1, 10.2 and 10.3) [230][231][232]. In each case, there was a good correlation between the sum of concentrations measured by pairs of HLC reagents and the relevant total immunoglobulin assay (regression coefficient ranged from 0.9 to 0.997) [230][231][232]. A publication by Bradwell et al. [127] followed, which contained HLC reference intervals that were based on a different set of normal samples, but again using prototype reagents. Summation of Ig’κ and Ig’λ HLC results for normal sera produced a good agreement with total immunoglobulin measurements for each HLC specificity.

Shortly after the publication by Bradwell et al. [230] finalised and fully validated HLC reagents became commercially available as CE-marked diagnostic tests for use on the Binding Site SPAPLUS® (a turbidimeter) and the Siemens BNII (a nephelometer) (Section 37.3). Each product insert contains reference intervals determined using the finalised HLC reagents, as well as a comparison of the concentrations determined by summated Ig’κ and Ig’λ HLC compared to total immunoglobulin assays for a range of normal and disease state sera; all showing good agreement. Examples are shown in Figure 9.9.

A summary of the results of these various reference range studies is shown in Tables 10.1, 10.2 and 10.3. From these results, it can be seen that, although there are differences between the various reference intervals for each of the Hevylite parameters, the variations are small. These are likely to reflect sampling variations (when different sets of samples are evaluated) and the use of different instruments which utilise alternative optical detection technologies, namely nephelometry and turbidimetry.

A study using enzyme-linked immunosorbent assays (ELISAs) to measure Ig’κ/Ig’λ ratios (for IgG, IgA and IgM isotypes) in pooled normal sera reported median values that are similar to those obtained with the Hevylite assays [235]. This lends further support to the validity of the IgG HLC ratios determined by Hevylite assays.

It is notable that the reference intervals for the HLC ratio for each immunoglobulin specificity are consistently different, suggesting that each immunoglobulin isotype makes use of a different repertoire of light chains. Thus, the median value for the IgGκ/IgGλ ratio is 2.0 compared with IgAκ/IgAλ and IgMκ/IgMλ ratios of 1.4 and 1.6, respectively [127].

There are no published studies that investigate the influence of age, gender and ethnic background on HLC concentrations or ratios. Hevylite concentrations in other biological fluids such as urine and CSF have yet to be studied. Clearly, in any fluid, the sum of the concentrations of each Hevylite pair should equal the total immunoglobulin levels but the ratio of Ig’κ to Ig’λ may differ from that found in serum.

Figure 9.9. Comparison of summated (A) IgG; (B) IgA; and (C) IgM HLC to total immunoglobulin concentrations by Passing-Bablok analysis.